“I brought everything from my house, everything I could fit in the car and carry. I even brought my tea mug with me.” These are the words of Maher Mahmoud Al Haresh, a Syrian refugee I met in Jordan last week. Small details like Maher’s mug make us realise how much we have in common with one another. But Maher is one of almost 80,000 refugees living in Za’atari refugee camp, and one of 760,000 living in Jordan, and he and his family live a life that in most ways could not be more different from my own.

Despite the admirable generosity of the Jordanians, who have welcomed Syrian refugees to their country, in my visit to the camp last week, I felt again and again the sadness and emptiness that the refugees in Jordan (and other countries in the region) experience. Having fled unimaginable danger at home, they are safe, but cannot imagine the future with optimism, and their day-to-day life remains unbearably hard. Like many of the others in Za’atari, Maher is unable to work, his wife and eldest child are seriously unwell, his children’s education suffers, and there is little hope of the family returning to Syria soon.

Aid agencies like Oxfam, UN officials and representatives from DfID on the ground are doing all they can to address this situation, doing their best to create employment opportunities for women and men in the camp. But while Syrian women’s participation in the labour market was relatively high before the conflict, cultural barriers and a very low female employment rate in Jordan, combined with more traditional views of gender roles that war has provoked, plus poor public transport and infrastructure, mean it’s been necessary to create gender-specific projects for women and men to work inside the Za’atari camp. 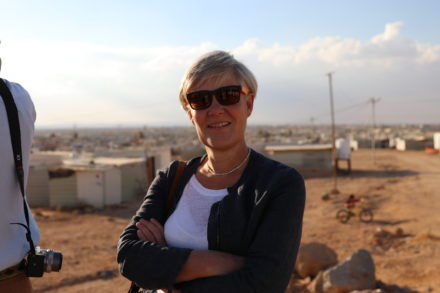 The projects we saw were uplifting. With my fellow parliamentarians Lord Alf Dubs and Tim Loughton MP, I visited a social enterprise where women are making trendy tote bags out of old tents – the very canvas that provided shelter in the early days of the camp’s existence, before tents were replaced with the cabin-like structures the refugees now call home. Oxfam helped the women to set up the workshop, and the bags are now being sold all over Europe, with proceeds being used to support the refugees. Meanwhile, Oxfam has worked with a refugee who previously ran his own successful recycling business in Syria to establish two recycling plants in the camp staffed by male refugees. Women peer educators have conducted community outreach work to encourage families in the camp to sort and recycle their waste. This project also generates income for the camp inhabitants, while improving its environmental impact.

Inspiring though they are, these projects are small scale, employing dozens of refugees in a camp of tens of thousands. Some of the younger refugees have never worked. I met a 20-year-old man who had come to the camp at age 14. He can’t go home for fear of being conscripted into the Syrian army. He’s not allowed to leave the camp to find work in Jordan, and there’s no work for him to do in the camp. Meanwhile, his 50-year-old mother, a qualified teacher in Syria, acts as an informal childminder for her neighbours’ children, but she too cannot get formal work in or outside the camp.

It’s easy for us to be critical of Jordan for restricting refugees’ right to work. After all, we too in the UK apply unreasonable restrictions that offer only the most limited employment prospects to asylum seekers, despite our high employment rate. In Jordan, the picture is different: unemployment is high, so protective employment policies may appear to make more sense. But the answer to Jordan’s economic challenges lies not in shutting refugees out of the workforce, but in recognising their potential to help to grow its economy, while rebuilding their self-esteem and dignity that come from having a job to do.

And the refugees have much to offer. The main avenue that runs through the camp, known as the Champs-Élysées, is lined with food stalls, mobile phone shops, hair salons and bridal gown boutiques – a sign of their entrepreneurial drive and desire to build something out of nothing. Others are highly qualified professionals – like the teacher I met – but whose expertise and knowledge is going to waste.

That’s why one of the messages I’m bringing back to the UK government from my visit is that we need to think much more creatively about how we use the power of our aid and influence to encourage economic and employment opportunities for Syrian refugees in Jordan. In particular, we should think about how we can boost employment opportunities for women, as we know that when women thrive their children do well, and for young people, which could avoid the loss of a generation that may otherwise never have the chance to work. These themes are of course very familiar to me from UK domestic policy, where I’ve seen again and again that maximising employment among women and young people benefits not just the individual employees, but their families, communities, the economy and society as a whole.

As with Maher’s tea mug, there’s a common thread between the lives of the refugees desperate to work in Za’atari and the lives of those I’ve met who are shut out of the labour market here at home. That’s why I’ll be pressing our government to promote solutions – like access to education, tailor-made back to work employment programmes, real living wages and a right to work for all who want to – for Syrian refugees in Jordan; the very solutions that I’ve long campaigned for in the UK too.

Kate Green is MP for Stretford and Urmston.