by Sarah Kennedy, LCID Member and Director of Development for S.A.F.E. 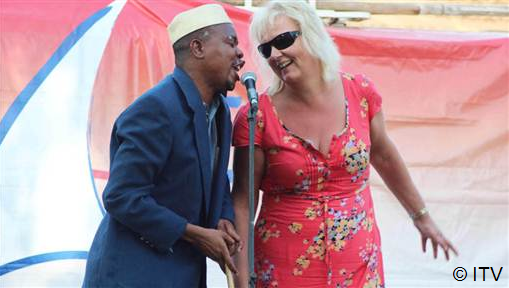 Tonight UK charity S.A.F.E. will feature in the first of two one-hour documentaries on ITV1: Corrie Goes to Kenya. In these programmes, four Coronation Street actors work with the S.A.F.E. team in Kenya who use theatre to challenge the misinformation and ignorance surrounding HIV/AIDS.

These programmes will take complex development issues and information about HIV/AIDS to a mainstream television audience in a visual and accessible way. Corrie Goes to Kenya will also demonstrate the ability of the UK arts sector to raise awareness about complex international development issues.

This exclusive new two-part series sees four much-loved Coronation Street stars – Sue Cleaver, Ryan Thomas, Brooke Vincent and Ben Price – take a break from the cobbles of Weatherfield to work in an entirely difference context: bustling Mombasa, where they will work with S.A.F.E.’s Kenyan actors to spread information about HIV.

The episodes will follow the team as they create and perform a series of soap-like plays as street theatre in Coast Province. There will be moving scenes as the Corrie team visit villages and meet people suffering from HIV and AIDS. They will also meet those whose lives have been changed thanks to S.A.F.E.’s accessible education through theatre, in a country where over 70,000 people lose their lives to the disease every year.

Corrie Goes to Kenya highlights the continued stigma and misinformation that surrounds HIV/AIDS across Africa, as well as the difficulties in overcoming these challenges in a country where most people do not have access to a TV and only 85% of adults are literate. S.A.F.E. beats the odds by delivering life-saving information through accessible, mobile street theatre.

Over two decades into the HIV/AIDS epidemic, there remains in Kenya widespread discrimination and misinformation surrounding the disease. People die of ignorance, with little or no access to information about transmission, prevention or treatment.

After performances, S.A.F.E. and its partners deliver services such as HIV testing and counselling, condom demonstrations and distribution, and workshops with the most at risk. This model has significant impact: for example, S.A.F.E. has recorded a 76% increase in awareness of and willingness to use condoms after performances[1]. To deliver these educational performances costs just 88p per beneficiary and £2 a month can reach a family with lifesaving information about HIV/AIDS. More information about S.A.F.E.’s work can be found at www.safekenya.org.