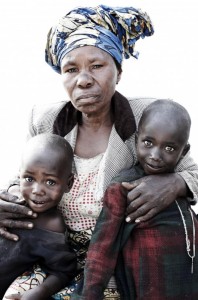 David and I were delighted that LCID were invited to 10 Downing Street to look at an exhibition by the photographer Rankin on his pictures from the DRC. The event was attended by charities, NGOs and publications looking to write a piece with a development slant. It was great to meet everyone and get a chance to spread the word about LCID.

The exhibition itself was incredibly exciting and innovative. The photographs were mainly portraits of locals from a villiage which had recently quadrupled in population. I found it refreshing to see a different kind of Africa represented through these portait pictures. All too often we are shown the pain, devestation and famine rather than the hope, laughter and love. The pictures themselves comprised of mothers and children, lovers and friends. I got a real sense of community from the story the pictures told.

After wondering around the exhibition for a while it was time for the speeches. First Gordon Brown spoke about how important it was to to shine a light on the problems in the DRC, and congratulated Rankin on his exhibition. Then Rankin spoke about how he had gone to Oxfam wanting to do something, but not really sure what. They gave him a list of five countries he could visit to photograph. Explaining that he loved an underdog he chose the DRC which was bottom of their list! The first time he went he took many of the portrait photographs which were on display. He told a great story of when he was coming to the end of his trip he showcased the pictures he had taken in the middle of the camp. Thousands of people turned up to look at the pictures, with many demanding he take their picture! What ensued involved Rankin lining up everyone in a circle round the camp and taking group shots as he moved down the line. Back in Britain he showcased his pictures and raised over £1 million pounds, which is just astounding. It also inspired him to go back a second time.

When Rankin returned he came armed with over 200 disposable cameras which he gave to the people of the villiage to use. These photographs were also displayed at Downing Street, and were my favourite ones by far! Rankin explained that a lot of the people had never used a camera before, and he had a lot of fun teaching them how.

I found Rankin’s story compelling and felt very inspired by his exploits. The last speech came from Barbara, head of Oxfam, who thanked Rankin for his work and explained there was still much to do in the DRC.

The event ended with everyone being given a copy of Rankin’s book showcasing his pictures from the DRC entitled ‘Congo Family Album’. I even managed to get him to sign mine and dedicate it to LCID. I thoroughly enjoyed my time at the exhibition and felt happy to have seen the DRC in such a positive light.

If you want to read more about Rankin’s time in the DRC please visit the Oxfam website.